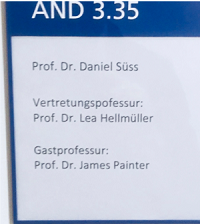 The door sign of the office welcoming us to the IPMZ said «AND 3.35».  It immediately made us think «AND… what is coming next?»  We need not have worried.  The welcome we received was second to none, the intellectual environment immensely stimulating, and the level of organization and support we received made us yearn for Swiss efficiency when we left.

It was in short, an absolute privilege to be working at IPMZ, and a once-in-a-lifetime opportunity never to be forgotten.  It is hard to imagine a better working environment.  Moreover, the research is cutting edge and should nationally be labeled triple «i» (i.e. the newly developed sign of excellence ©jameslea), as it is international, interdisciplinary, and highly innovative.

But we were also keen to find out more about the Swiss while we were there (even though Lea is Swiss, she never wants to stop learning and even though James is British, he considers himself a citizen of the world who happens to have a British passport).  We noticed that many previous visiting professors had spoken of what it is like to live in Switzerland, mentioning such «classics» as efficient transport and expensive trash bags, or quoting from the film the Third Man that despite 500 years of democracy and peace, the only contribution the Swiss have made to world culture was the cuckoo clock.

We were not satisfied with this.  We wanted to delve deeper, like good academics, testing received wisdom about the essential nature of the Swiss (Were they really all modest, understated, and evidence-based?), and if necessary debunking it.  So after many weeks of research, we presented our results at the farewell Christmas Apéro.

Amongst our many findings were:

Despite this last characteristic of the Swiss (i.e. no small talk from Lea), surprisingly we established much rapport while sharing an office. In short, we both had a ball.  We should thank everyone – not just the managers, the professors, the post-docs and docs, but also all the support staff.

We left with very heavy hearts, but so grateful for the intellectual and social nourishment that IPMZ offered us, and for the professional and personal friendships in the future.