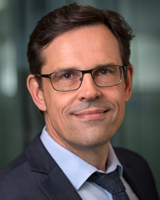 Frank Esser Takes Over as Head of Department

On 1. August 2017, Professor Frank Esser took over the helm of the Department of Communication and Media Research at the University of Zurich. Frank will serve as department chair for four years, until 2021. In his new role, Frank will be directing the department and will be responsible for all operational and business processes, and for managing the academic, technical and administrative staff.

Among the future tasks Frank has identified for himself are coordinating the department-wide reform initiative “Profile 18”, and the continuous adjustment of the department to the digital transformations of media, science, society and the professional market. He said: “We have earned an excellent reputation internationally for our research performance, and we intend to continue on this course moving forward.” The 2017 QS World University Ranking lists the department as the highest-rated communication program in German-speaking countries (Germany, Austria, Switzerland) and in the leading group of all European communication programs.

After the symbolic hand-over of the keys during the department’s annual summer retreat, Frank thanked Professor Werner Wirth for his previous service. Frank said: “With his desire for transparency, fairness and an ability to address issues well, Werner fulfilled the role of chair in an exemplary fashion. This was what impressed me the most and I thank him for it on behalf of the entire 70-strong team.” Werner had guided the department through a thorough external evaluation, helped to recruit several new professors, and prepared the revisions of new study programs. Werner was always committed to improving teaching and promoting young talent, and has thankfully agreed to serve as Director of Undergraduate and Graduate Studies for another year.

The best way to reach Frank is via email; he is always open to discuss ideas and suggestions for the future development of the department.